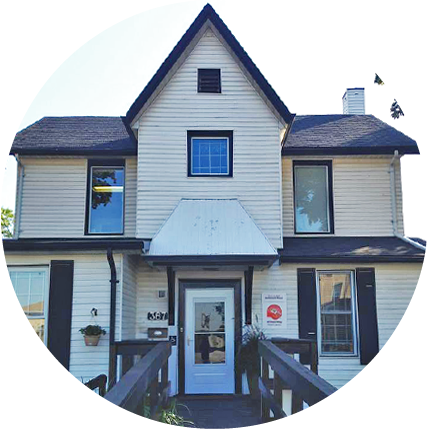 We provide wellness opportunities through our food bank and programs to serve children, individuals and families who experience financial and social challenges.

To be part of a community that will allow children, individuals and families to experience and lead healthy, meaningful and socially responsible lives.

Simcoe Hall Settlement House was established, in 1935, by the Women’s Welfare League in response to human and health conditions created, largely, by the Great Depression of the 1930’s. During the war years of the 1940’s, the Women’s League remained active and dedicated to aiding the lives of less advantaged families and alleviating the consequences of poverty in Oshawa and surrounding areas.

In the post war years of 1950’s, they expanded their vision of a fair and equitable community, in which all members could prosper, by turning their attention to early education, intervention and prevention programs for children and youth. Thousands of adults, living and working in our community to-day, once passed through the doors of Simcoe Hall to attend the Simcoe Hall Nursery School and Children’s After School Programs. Seniors were also welcomed to participate in the community’s first recreation and leisure program called the Golden Age Club which still exists to-day.

Simcoe Hall Settlement House would like to thank our gracious supporters for their continued support!

Simcoe Hall respects the privacy of our clients, staff, volunteers and donors. We are committed to handling all personal information in keeping with the Personal Information Protection and Electronics Document Act (PIPEDA) and the ten privacy principles. For more information or to request a copy of our privacy policy please email info@simcoehall.com.